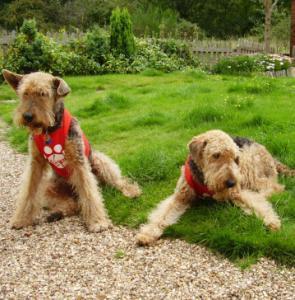 The late Abbey Hall (left) and Grace after arriving in England, May 2007

When my husband’s company offered to transfer him to its U.K. office, my main concern was our Airedale Terriers, Abbey and Grace. “We can’t leave the girls behind,” I moaned, “but we’re not putting them into quarantine.”

Like many other pet owners, we were clueless about the rules for flying dogs overseas. It turns out that, as of 2002, vaccinated, micro-chipped pets can fly to European Union (E.U.) countries from the U.S. and Canada under the Pet Travel Scheme (PETS) without spending six months in quarantine.


"How Dogs Talk: The Scoop from an Expert"
Appleseeds, April 2012

Author Alexandra Horowitz (Inside of a Dog") explains how dogs communicate with people and other dogs.

"My Mother, The Spy"
Appleseeds, November-December 2011

The story of Confederate spy Rose Greenhow through the eyes of her daughter, "Little Rose"

"At Large: A Giant Beaver is on the Loose in Great Britain"
Hemispheresmagazine.com, April 2010

A 95-pound beaver escapes from a beaver sanctuary in Devon, U.K. and eludes his would-be captors


"The Giant in the Forest"
Highlights for Children, September 2009

The making of the "Giant's Head" at the Lost Gardens of Heligan, Cornwall, U.K.

How two Airedales flew from Chicago to London without a hitch

By the time I mastered the roundabouts, it was time to return to the U.S.

An illustrated history of American health reformers and crusaders